All Collections
This is us!
🦸‍♂️ You too can be a Superhuman!

🦸‍♂️ You too can be a Superhuman!

Written by Dachi
Updated over a week ago 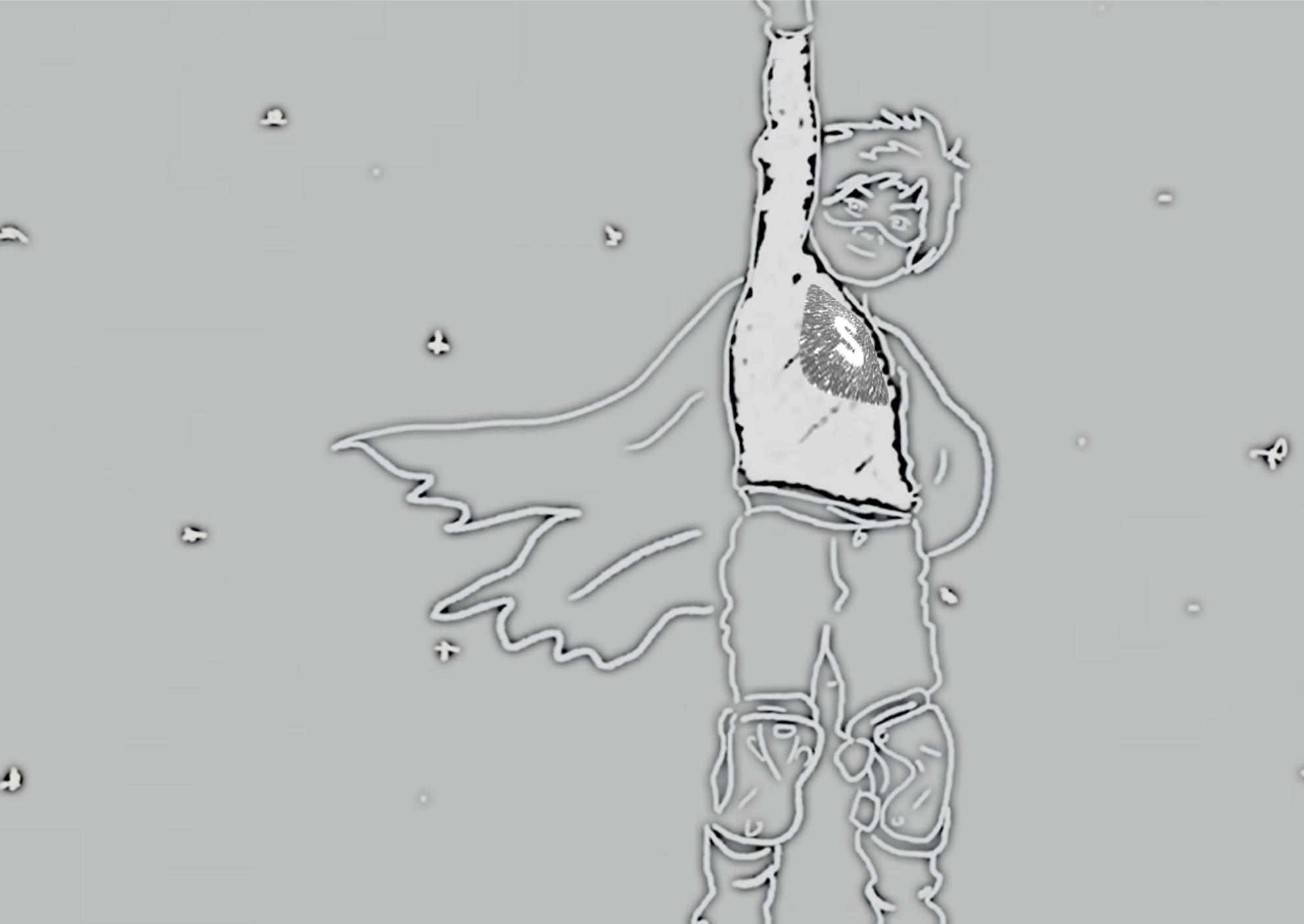 You have just finished your morning routine… One last sip of your coffee and you will open the laptop!

Another workday is about to begin…

You may like your job or you may not, you may be in love with your laptop or you may not… but one thing is for sure: the statement that - “you are not satisfied with your browser”- dramatically fails to capture the gravity and magnitude of your true feeling…

Something doesn’t add up. It’s the 21st century… everyone is talking about efficiency… productivity…quantum computing… colonizing the red planet…And yet… you are wasting your time in a desperate quest for finding the right page in the clutter of tabs… jampacked side by side causing this feeling of irritation that we all are pretty much familiar with!
Yes, you guessed it right… I am talking about the ‘tab hell’ that you are staring at right now!

You opened your browser… saw the messy clutter… And in that right moment, the neurons fired in your brain reminding your friend’s boastful face from yesterday’s party, saying: “No my friend…after Stack, tab hell is a ‘no-problemo’ for me anymore. You should check it out…it will make you feel like a superhuman”

Operating System for the internet ?! 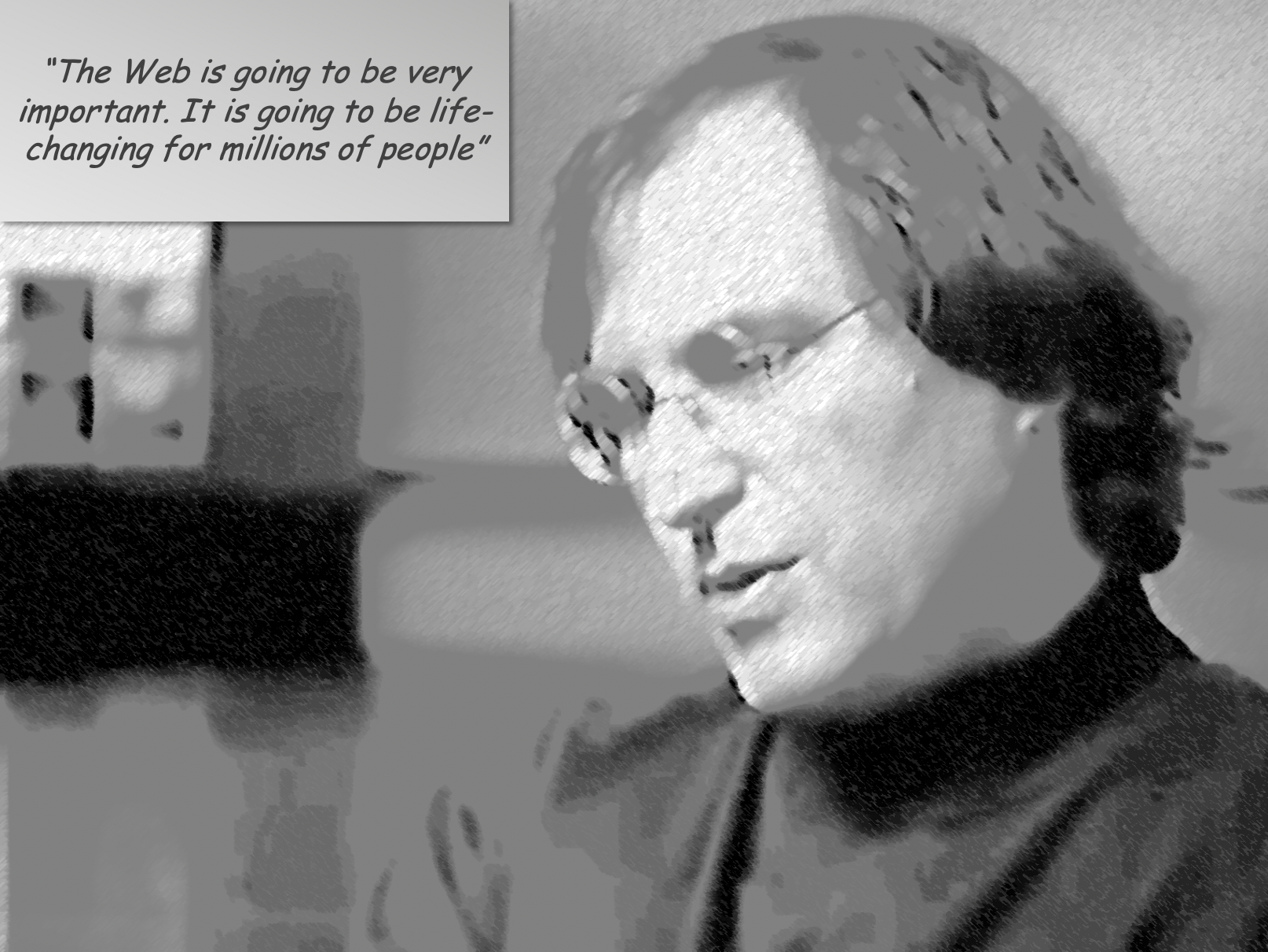 Back in 1995, when Web was only a few years old, in his famous interview he made a number of pretty accurate predictions:

“The desktop market has entered the dark ages, and it’s going to be in the dark age… The Web is extremely interesting, cause it is the fulfillment of our dreams…Web is going to be profound in what it does to our society”

He was indeed a genius visionary. By the time he said those words, the Internet was just a murky place of only a few thousand bewildering web-pages (in fact only 23 000). There were only 40 million people having access to it worldwide. Internet Explorer was about to wage its infamous war against Netscape and Opera. And Elon Musk was striving hard to convince companies to create their online presence.

Do you wonder what was the only thing people could do on the web by that time?- Browsing, the meaning of which as defined by Merriam-Webster is as follows - “an act of casual looking or reading”.

Hence, with this in mind, the Browsers, the only medium to access the Web, were designed to meet the browsing needs of 1995s man: a window with an address bar to type the URL and a clean white ‘featureless plain’ to load a web-page on an entire screen.

25 years have passed since that!

There are 1.5 billion web-applications and web-sites, and 4.3 billion internet users. The Web is not a place of a few thousand company web-pages anymore. It’s a gargantuan space of information exchange done mostly via thousands of web-applications. A major place where we do business, communicate with each other and have fun.

If we had teleported Jobs from 1995 to 2020, even he would have been amazed to see how far has today’s Web changed from a place where the only thing one could do was “an act of casual looking or reading”.

And how do Browsers look today? … Well apart from a very few modifications, their design is pretty much the same: a window with an address bar to type the URL and a clean white ‘featureless plain’ to load a web-page on an entire screen, designed for performing an act of casual looking or reading, aka browsing.

…But what we do on the internet is not browsing anymore.

Each of us is using 10+ apps on a daily basis, with those beautiful logos below, with average 9 social media accounts per person and 8 SaaS apps per employee.

This is the internet of the modern-day. Those beautiful logos represent the Web of 2020, none of which for the matter of fact existed in 1995.

Hence, browsers of 1995 design miserably fail to meet the working needs of a 2020s Internet man. And there is no other application to help you organize and manage them from one place… to help you operate them efficiently!

Therefore, to solve this problem, what you need is not a better browser.

What you need is a hyper intuitive web-application manager with browsing functionality.

What you need is an Operating System for the Internet!

The birth, design and the Masterplan

On a usual sunny day of August 2018, in a beautiful city of Utrecht, the Netherlands, one friend told the other, he had discovered that a personal side project of his turned out to be solving a generic problem for everyone… 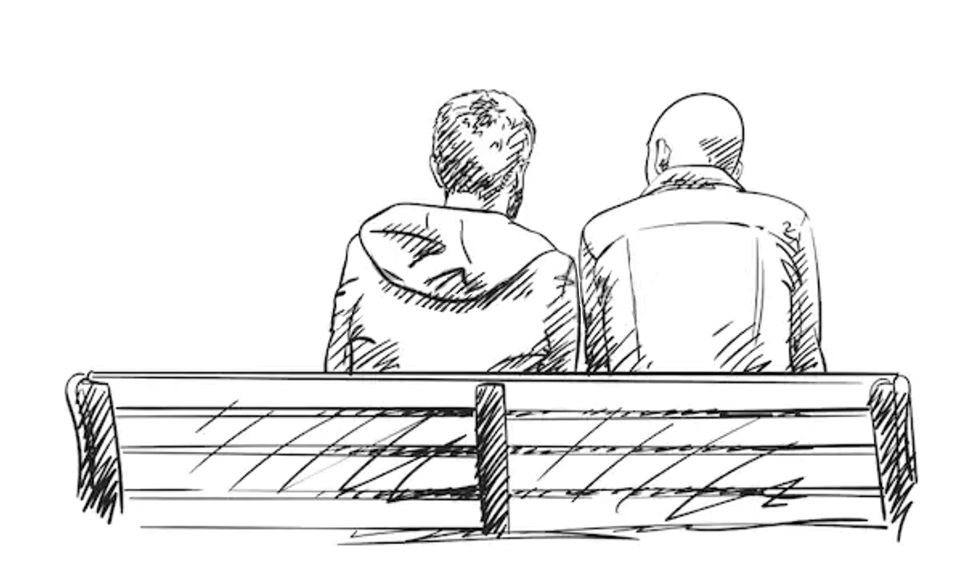 Originally a brainchild of Zviad Sichinava, Stack was born with the modest tagline - “tweet-deck for your social apps”. And in less than six months, inspired and encouraged with the feedback received from the Product Hunt community and beyond, it transformed into a very ambitious project of 7 passionate Stackers - creating the very first Operating System for the Internet.

Following the famous quote - “If you are not embarrassed by the first version of your product, you’ve launched it too late” - we released the beta version of Stack in November 2018, and started collecting the feedback.

The primary goal of the initial design was to fix the - infamous “tab hell” problem. And we promised ourselves, that if on top of it we could offer fast and intuitive navigation, we would buy ourselves DMT (kidding on this).

Investigating the root cause of the problem, we came to know that the clutter emerges due to the need of using the large number of web-applications either simultaneously or with rapid succession in a short period of time. On top of this, there is a huge list of additional applications (messengers, social media, e-mails, etc.) that our monkey brain wants to constantly keep in check. Last but not least, who doesn’t like to listen to music while working?
… aaaaand…tadaaaam… Welcome to the tab hell!

— Have you ever wondered where the heck does QWERTY keyboard come from?

Well…actually, no one knows for sure, cause Christopher Latham Sholes, the creator of the very first typewriter, took it with him to death. However, the scientifically most recognized theory claims that, in order to avoid collision of typebars, he decided to arrange on the keyboard the most frequently used two-letter sequences so that the probability of typebar overlapping and jamming was minimized.

— Have you ever spotted that quite a large number of web-apps (all social media, news-feeds, and even medium) use only middle 40% of your screen for providing you with the main content?

Most of the time the rest of the space is just a white void.

Using these two issues as a point of departure for the design thinking, Stack emerged with its unique look:

Last but not least, putting stacks of parallel cards on top of each other creates a vertical Spacebar, with each stack like a different floor of a virtual building, introducing the most immersive internet experience up to date.

Users can reposition Spacebar horizontally to the bottom, which gives Stack elegant look of an Operating system of the future, picking up the best of both worlds (Mac and Windows), and augmenting it with smartphone functionality.

Tip: Horizontal Spacebar is especially handy when working with apps on full-screen and maximum concentration.

This is how your very first interaction with Stack looks like in practice.

By simply clicking the app logos or just typing the URLs, you start building your stacks i.e. groups of parallelly aligned cards.

Furthermore, mastering the shortcuts menu ⚡️ which currently looks like a manual for BFR astronauts, gives you the speed that definitely makes you feel like an internet superhuman.

On top of that, Stack allows you to unify and control all your notifications from one place 🔔 synchronize your stacks across all your devices 🔂 and open multiple accounts of the same applications 🎭

And if you want to distinguish and separate your work and private life or different projects even further, you will find Workspaces in the PRO plan.

For more thorough tips and guidelines on how to set up your Stack in less than 5 minutes, so you can feel like a real superhuman, please check out this 3-min read post!

…But keep in mind, this is just the beginning!

Although Stack currently runs as a fully functioning web-application manager with hyper intuitive design and super fast navigation, there is still a long way till we reach the promised land - the most sophisticated Operating System for the Internet.

As the famous saying goes: “Rome wasn’t built in a day”. And neither giving Stack the final look that we want will be an easy journey. But one thing we know for sure:

There is no other more exciting thing for us to be doing today, than building a product that brings value to thousands of people and has the potential to define how our future interaction with the internet is going to look like.

And last but not least, inspired by Tesla, we do have a very clear (and also top-secret) Masterplan of what we need to do to achieve our goals! 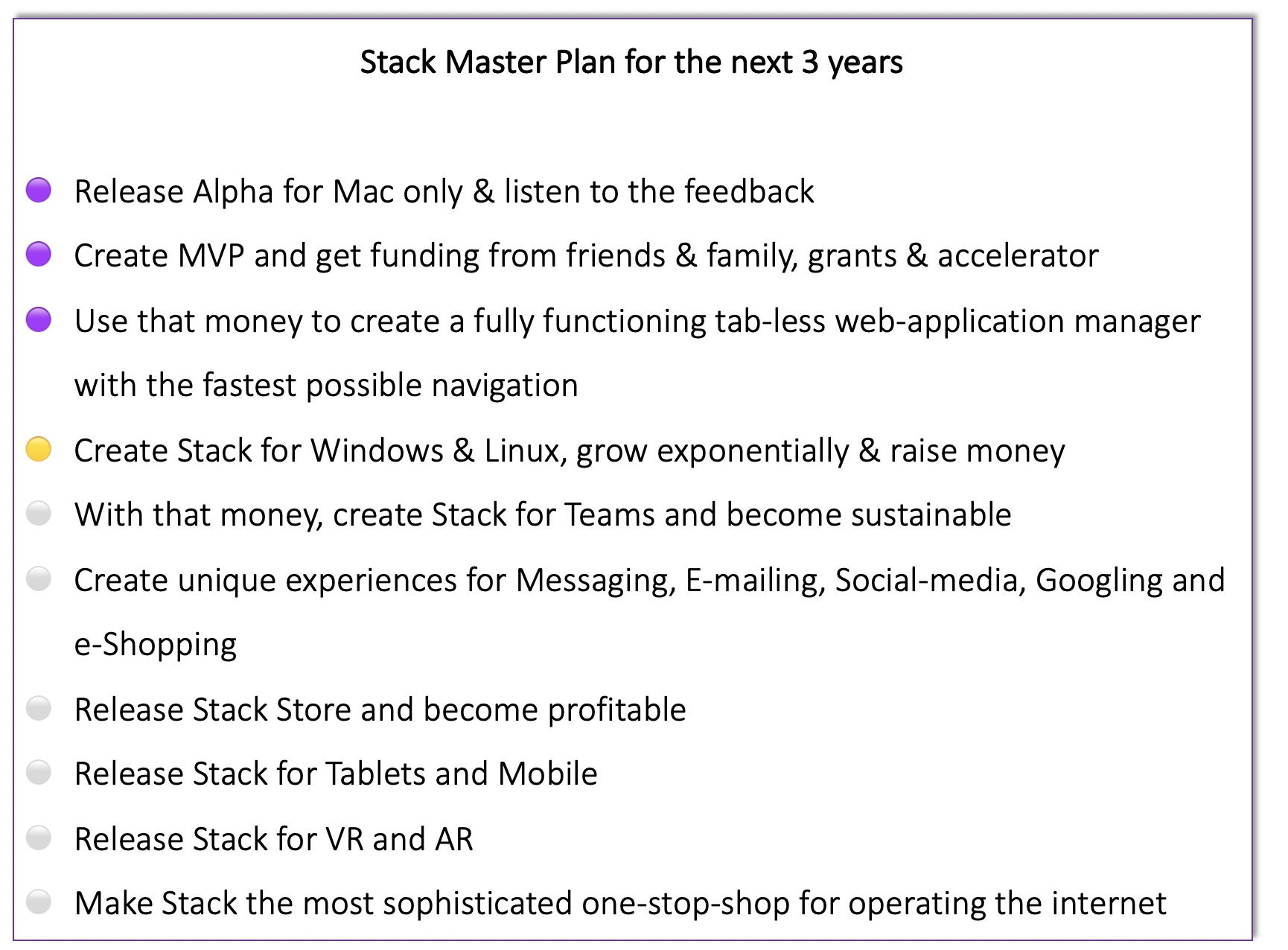 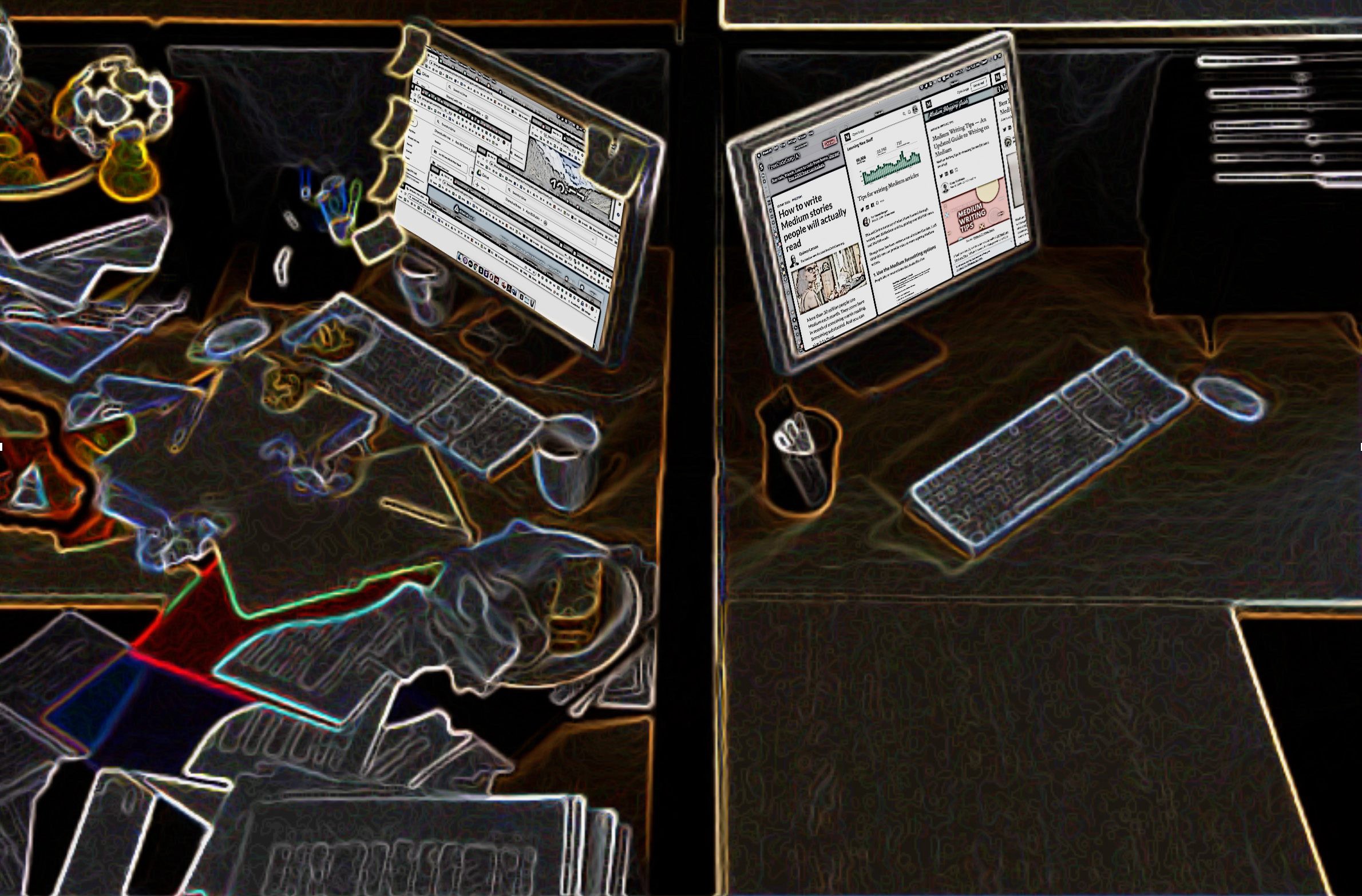 You have almost reached the end of this blog!

So far, you have read that there seems to be a problem… a generic one… Classical browsers are outdated, their design and functionality can’t meet the needs of the modern man… Stack story, the way it started, and what it morphed into is quite appealing… We also have a Masterplan of how to create the most sophisticated Operating System for the internet… and this is the most exciting journey that we could be undertaking today…

However, there is something that is still missing here in this blog… Something that is the most important part of our journey… The integral part of the entire process, without which Stack is just a bunch of lines of codes - the Great Community of Stackers!

Stack was born with a user-first philosophy. From the very first moments of its existence, the feedback received from Stackers was the main driving force for its development. Hence, Stack is designed for humans, not for technology! Talking with Stackers, sharing thoughts, and listening to your stories is what we love the most!

If you think that working with the internet should be hyper-intuitive, easy, smooth and fun… if you share our vision of the future… or if you simply want to quadruple your productivity and become the internet superhuman, onboard our spaceship!

Don’t be a ‘Tabber’, become a Stacker, join our great community, and don’t forget to always share the feedback!

We are building this together…

Thanks a lot for reading our Story 💜

If you want to be notified when I publish a new story, please subscribe to our e-mail list. If you want to hear more about Stack, please also follow our Social Media channels!

Or if you just want to have a beer 🍻or a coffee ☕️ with us, ping at any time!

Did this answer your question?